May 13, 2013
For my 3rd cake last week, I was asked to make a cake for an auction at my old high school, BHS.  The French teacher, who was actually my grade 8 English teacher and my brother's since we were in French Immersion, wanted a cake to outdo everyone else.  Enough said.  I can be very competitive when the mood strikes.  It usually doesn't matter what the prize is, just the title of winner is often enough.  So, it was not a problem for me to go all out.  Judy (when my brother referred to her as Judy the first time, I wondered who he was talking about and then I clued in that he was talking about Mme.) wanted a French themed cake with the Eiffel tower and a frog on it. 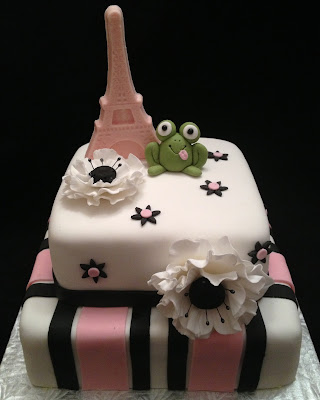 I made an 8" and 6" tier, both chocolate.  The frog I made out of fondant.  I'm still not into making 3D figures but this was small and Googled polymer clay frogs to come up with this design.  Not bad if I do say so myself.  The Eiffel tower is made from a chocolate mold. The big flowers I made from following the instructions from this video on Making Flowers. I love this technique.  It will be repeated again on future cakes. 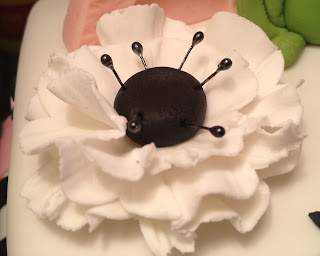 Judy's class actually won the cake, which is pretty cool.

Popular posts from this blog


So, I started off with an 8" two layer square vanilla base tier.  The filling was raspberry mascarpone mousse.  It is so good!  Then I covered it using the grass tip to look like carpet with buttercream icing.  I would have used the filling but I didn't drain out the seeds and they would have clogged up the tip.  It wouldn't have been pretty.  Instead I dyed it to match the filling as close as possible to make pink shag carpet.
For the toilet paper roll I did a 6" 3 layer cake and covered it in fondant.  I added an extra piece of fondant to make it look like the paper was unraveling.  On the top I added a black circle of fondant to look like the empty space from the roll.  Lastly, I took a toothpick and spun the cake around to make the indentations of a "roll" of toilet paper.
The signs I made out of fondant.  In the picture I was sen…
Post a Comment
Read more

February 11, 2017
For this "cake" I made two dozen vanilla cupcakes and arranged them on the cake board in the shape of the rainbow and clouds.  To make sure the cupcakes didn't move I added a dab of icing on the bottom of each cupcake.


It's not that often that I get to dye icing, or six different colours at once.  You can get a really good bicep workout,


Miss E was kind enough to lend her figurines as models for the picture.  The clouds piped out perfectly.  The rainbow was a little more difficult.  Next time I would put a base coat on the cupcakes to help keep the top coat more level and easier to pipe over.

Construction Cake for a Civil Engineer

February 08, 2015
My friend Hibah had booked me to do this cake months ago, but we both forgot about it.  I think I completely forgot about and she forgot to remind me.  But that's okay, I still had plenty of time to make this cake when we talked about it a few days beforehand.

Strangely enough the Perfect Chocolate Cake was the perfect cake to do for what Hibah had envisioned.  This was a 3 layer 9" cake with whipped cream filling and the chocolate fudge icing.


To make this cake look like a construction zone I sent Mr T off to the dollar store to pick up some toy trucks.  He did not disappoint.  I would tell you what each one was, but I only can confidently say one of them is a dump truck. I trimmed off a portion of the top layer to make it look like it was being dug up and then roughly iced the cake and spread the icing onto the cake board.  The dirt was made out of crushed up Oreo cookies.  The cones were out of fondant.

This cake came together fairly quickly and easily.

Bluefunk
I love to be creative and I love to feed people. Making the cakes allows me to do both. Cake decorating is a hobby I got into a few years ago. I decided it was time to show off how far I have come and how much I have still to learn and perfect.